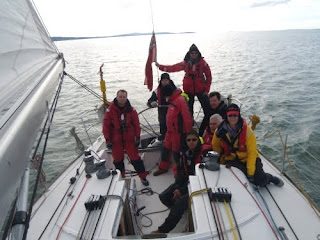 Crew: Trevor Drew, Nick Bowles, Alan Voysey, Andy Lapsley, Dan Groves, David Balding, Emily Shrosbree, Jane Harris, Jonathan Law, Mike Yogarajah.
It was with some trepidation that the crew assembled at Ocean Village on Friday afternoon, to prepare for the first race of the season, which, for some, was their first offshore race and for others, their first race ever!!
The forecast didn’t do much to allay any anxieties, with strong easterly winds on Saturday, building over the next few days. Accordingly, we made sure everything was ship-shape and set off for Cowes, where we were to spend the night, as we’ve all found it easier to get up at 6am than 4am. A modest libation and a meal at the Anchor was the scene for the major decision of the campaign – what names to give to the two watches. Given the day, it was a no-brainer – I led William Watch and Nick led Kate Watch!
The race course was straightforward, taking us out through the Needles, around the fairway buoy, then easterly beat to the Nab tower and straight to Le Havre. Saturday morning was much as forecast with strong easterlies. This presented two challenges to the relatively novice crew – a spinnaker start and a beat along the southern coast of the island. Given a large fleet of 110 boats, we decided to start on the outer end of the line, which was less populated. And, since the crew had hardly ever flown a spinnaker, we elected to start with the jib and put the spinnaker up later. This, and short confusion as to whether we were OCS, did not give us the best of starts!
But we settled down and led the back of the fleet to the Needles.
Again, with our precautionary approach in the F5-6 winds, we dropped the spinny off Yarmouth and rounded the Fairway buoy without problems and onto the long beat to the Nab against the building ebb. This was hard work, with only a couple of Challenger yachts for company, but we made reasonable time and were fortunate in completing the eastern half of the island on a single beat. We rounded the Nab with some relief, bringing the long beat to an end.
We made our way south, dodging a number of large ships in the process, on one occasion having to pass ahead of one and immediately duck behind another running in parallel. A spectacular thunderstorm announced our safe passage across the channel, but we nipped out under the clouds before the rain fell and the early morning found us off Le Havre. We had to tack a few times to make the finishing line, crossing at 06:34 on Sunday.
The forecast predicted even stronger winds on Monday, so we did a quick U-turn and headed home, filling ourselves with hot chilli and pasta – yum! The early part of the return journey was pretty benign (see pic), but it got windier and lumpier as we got closer to the British coast and, by all accounts, those who stayed in La Havre had a pretty hairy journey back.
Our placing, last in IRC2 and 90th IRC overall might seem a little disappointing, but given the crew’s lack of any spinnaker experience and the strong winds, also coming in only two hours after the leading First 40.7, I’m not disappointed. We came home safe and uninjured, and the race has given the crew a real sense of what they might experience in the Fastnet itself, also giving us something to build on in the future. Thanks to all the crew for their sterling efforts!
Trev
Posted by CSORC at 17:24