After a quiet spell following the IDOR back in May CSORC finally got organised and sorted out a charter, entry and crew for the St Peter Port JOG. This is a nice event - not too long or too short, with an interesting bit of navigation in the later stages, and a pretty destination for a bit of post-race R and R.

The boat was Blue Juice, from MEC Sail. She's a First 40.7 and no stranger to us as the boat we campaigned for the 2011 Fastnet. She's big and spacious and not too complicated.

Our class 3 start was at 14:00 off the green at Cowes and we arrived with the wind blowing 12 knots from the SE, so with a Westward start we prepared the kite. It was an unhurried start with a long way to go.

The wind was very shifty on the reach down to Yarmouth but we held the kite, swapping places with Red Zeppelin and Swan Galiana. We emerged into the Channel and sailed the rhumb line on 210 in a SE wind until evening, when the wind died. We tried the light spinnaker when a zephyr materialised from the north but eventually had to drop that as we were led round 360 degrees and actually found ourselves heading north.
Posted by CSORC at 16:23 No comments:

Eight crew members gathered at Port Hamble Marina in the sunshine on Friday evening. We were mostly new to J/109s so Richard (owner and skipper) gave us a detailed tour of the deck introducing the bowsprit and demonstrating a hoist of the snuffed kite and bucket. The failing light and the rumbling noises from our stomachs indicated it was time to head or some food. We enjoyed some carbo-loading pasta dishes at Banana Wharf before getting our heads down to ensure we were fully rested for the early start in the morning.

We pushed off the pontoon at 7am, and headed across to the start area off Egypt Point near Cowes, our ears keenly tuned to the weather forecast. The conditions were on the wild side, Force 8 had been mentioned, but we were all game for the trip to Poole so there were a few disappointed faces when the race officer announced the red flag was flying which meant we were staying in the Solent. When the details of the course were announced, it transpired we were indeed heading for Poole, just wasting a bit of time rounding marks in the Solent until the worst of the weather and tide had passed. Smiles all round!

There was a strong south-westerly, and it was a downwind start, so we prepped the number 4 kite following almost to the letter our marina-bound lesson from the evening before. A slick launch was slightly delayed,  while we sorted the tack from the clew, but we managed to get it up for a few hundred metres before we reached the first mark. The kite was then stashed safely for the rest of the day as we would be beating upwind for the rest of the race.

We zig-zagged close inshore up the Western Solent to keep out of the flooding tide, watching the depth carefully to leave our tacks as late as possible. After coming through the Hurst narrows we kept north, leaving North Head to port as the course demanded. There was a decent swell and we were all sat on the rail taking frequent salty showers – I'm sure our grinders appreciated a shower to cool them down after building up quite a sweat doing a great job with all those tacks!

We passed Christchurch and headed straight for the squall between us and the finish line in Studland Bay – a tactical decision which left us drenched but rewarded us with 6th place!

Safely moored up in Poole we turned the boat into a washing line and debriefed while crunching on salt-and-vinegar discos (appreciated more by some than others). Post-showers we gathered in a cosy pub for some peas (mostly served with fish and chips) and then another early night.

Sunday morning brought more rain – nevermind, none of our kit had dried overnight anyway – but with it some fantastic skies decorated with pretty rainbows. Once the nasty stuff had blown through we were treated to a pleasant run all the way home.
The course was the reverse of the outward leg, leaving North Head to starboard on our way back into the Solent, which gave us plenty of opportunity to learn the dos and don’ts of both inside and outside gybes with the J/109’s asymmetric spinnaker.

Back in Hamble we stripped Jangada Too of her sails (she is dry sailed), briefly using the main as a bivouac, as yet more rain (hail even) came down on us. A fitting end to a fantastic, if slightly wet, weekend!

Many thanks to Richard for allowing us on board Jangada Too, for skippering two great races and for all his patient tuition (especially on rope tidying!). 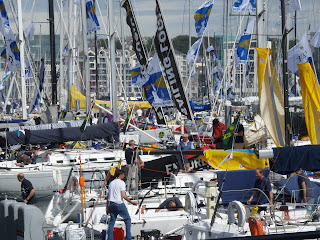 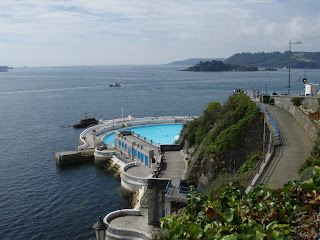 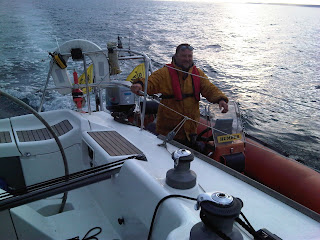 We made reasonable progress until about 4pm, when the water pump on the engine started chattering. Thirty minutes later it finally gave up. Leaving us adrift about 5 miles off Plymouth. With little wind and drinking time dwindling, we have admitted defeat and called Sea Start for a tow to Plymouth. Ho hum...

a night at the admiral's 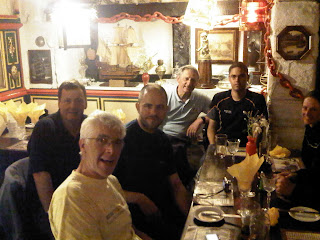 Thurs 0920
We had a very convivial evening in the Admiral Benbow last night and, although in good mood, had an early night - most turning in by 10ish. We were up bright and early and are now rounding the Lizard on our way to Plymouth, under jib and engine.

A plan is forming... 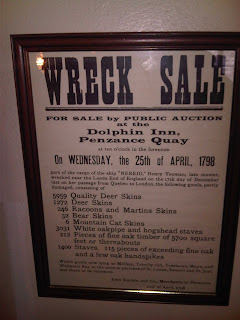 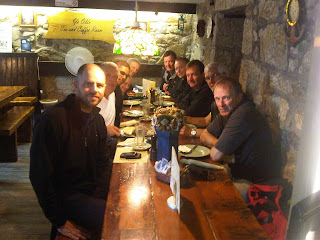 Wed 11:48
We're all enjoying a hearty breakfast at Ye Olde Barbican Tea & Coffee Room - Alan is insisting that we maintain our 3500 kCal per day, even when not racing...
Posted by CSORC at 12:11 No comments: