Jangada Too qualifies for RBI 2010

Well, we've succefully completed the qualifying voyage, required by the RB&I organisers. Our plans to qualify were based on an extended “Round the Island”, from the Hamble, around the Isle of Wight to Falmouth followed by a return leg to the Needles finish, then home. Three hundred and ten miles, as the seagull flies, but probably ending up more, by the time we’ve tacked to make our way against the inevitable south-westerly that we anticipated we would face on our way down the south coast.
In the event, our planned early Thursday morning start was thwarted, almost before the off. The GRIB files, detailing the wind forecast over the following days, told a sorry tale – a dominant high pressure that could jeopardise our chances of success. Was it worth even starting? Richard and I debated it over the phone, in the early hours of the morning and finally decided to go for it. The dominant wind would be a north westerly – which meant avoiding a beat, and we might benefit from sea breezes that would likely develop under the forecast conditions. 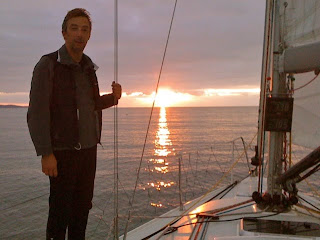 So, with a revised departure time of 11am on Thursday, we set of on our adventure. By then, Richard had done all the boat prep and victualling, so I did little more than step onto the boat, carry out routine safety checks and cast off.
We registered our passage plan with the Coastguard and our first leg, towards the Nab tower, was typically propelled by an unforecast south westerly, which backed towards the southeast as we approached our first mark. Facing a beat in the wrong direction, we decided to round Bembridge Ledge instead and at last made our way westwards, catching the first of the west-going tide. We made good progress to Anvil Point, but we were never going to make the critical tidal gate at Portland Bill. Though the wind dropped, we managed to stem the foul tide and finally made forward progress as the tide changed.
Richard has done quite a bit of two-handed sailing, including the Fastnet earlier this year, but my own experience is minimal – a circumnavigation of Corsica 12 years ago, which involved copious wine in some very fine restaurants but was otherwise hardly an endurance. We settled into a routine pretty quickly, mainly involving “one up, one down”, but typically not making enough of sleep opportunities early on.
Dawn found us in Lyme bay and we finally made Start Point in the late afternoon of Friday. The wind was flukey and very light and pretty consistently from the north, though the sea breezes did kick in, as expected, reversing the wind direction in the early afternoons, until dusk. Our progress was slow but steady and we finally approached our destination in the dark of Friday evening. We logged our arrival with Falmouth Coastguard and, much to their bemusement promptly logged another passage home again. They even asked us to confirm our departure time as “immediately”! 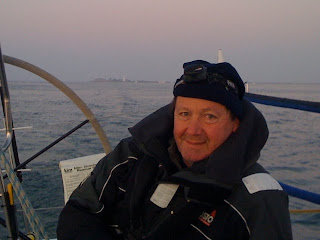 Friday night gave us a good run to Plymouth, but once again, we fell into the mini-Doldrums off Start Point on Saturday morning. The wind finally picked up a little and took us back into Lyme Bay. The day was, as we had anticipated, the worst day, with the wind completely dying for long periods. I’d brought along a fishing rod, but not even the mackerel were biting. Not even a sea breeze came to save us. It was not until the evening that the wind returned from the northwest, with a forecast veer to the northeast.
Accordingly, we headed north to ensure we would not be headed. It worked out well, giving us a constant beam reach towards home. Indeed, the wind built during the night, so that we passed south of Portland at an impressive 8 knots, sailing due east.
We creamed the last few miles past Anvil Point and to the Needles. We debated the North Channel, but decided it was better, given the tide, to go up the Needles Channel. Once past the forts, the wind veered a little further, straight onto the nose and dropping to 3 knots. Time to call it a day. We finally finished around lunchtime on Sunday – 340 miles or so in 3 days.
Richard and I also plan to enter the two-handed division of some of next year’s RORC races, to gain further short-handed racing experience. We'll post our planned races here and do our best to let you share in the adventure by following this blog, which thanks to the wonders of satellite communications, should be updated daily once the race starts.
Trev
Posted by CSORC at 14:08