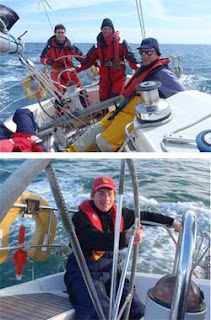 We set off from Ocean Village on Friday evening, for Cowes, to be ready for the 0750 first gun. In CSORC tradition, the names of the two watches were decided in the pub, with “Wallace” and “Grommit” carrying the vote.
The start line, off the Royal Yacht Squadron, was quite a busy one, with over 100 boats in the four classes and the big boys, including two TP52s, lurking for position at the outer end, for their later start. Our Sigma 38’ was one of four in IRC3 class setting off at 08:00. The forecast was for light westerly wind, veering northwest and reducing in strength. The shortest of the three courses was therefore chosen, in deference to the forecast light winds. We had such a good start I was a little concerned we’d over-cooked it (note to self – not a “round the cans” race!) but there was no second gun, so we were OK and held our own on the beat towards the Needles. Things got more confused as the later, faster classes caught up with us as we rounded the Needles Fairway buoy. We had readied the spinnaker pole and, despite the relatively gentle breeze, I had decided on the heavier kite, as I felt it would behave and cope better with the increased pressure of the beam reach. The fleet separated after the mark, with the majority of the fleet taking a more southerly route. As usual, we found ourselves in the minority! But, since both Phil and I had calculated similar courses, taking the neap tides into account, we stuck to our guns.
The long, long spinnaker run continued for many hours, but the anticipated veer we hoped would match our heading didn’t materialise to the extent we hoped. As the apparent wind moved forward, so our concern over the merits of the kite over the No1 genoa increased. A brief experiment, however, demonstrated our original choice was the right one, with over a knot benefit with the spinnaker. Our night-time approach to the second mark of the course, the A5 Racon westerly cardinal off Le Havre, was a little further off than we planned, and the spinnaker came down. Our approach to the finish near the entrance to Le Havre was uneventful, with the strobe of the Committee vessel clearly visible among the plethora of lights of the Seine entrance. We crossed the line at 0134, rounded the outer mark and set off for home. A little rain during the night of our return failed to dampen the pleasure of a very enjoyable race and our provisional result, 12th of 26 in IRC3, 34th overall in IRC and fastest of the Sigma 38s, was a very satisfying one!